The gasification of biomass is one of the most efficient forms of energy generation from natural sources. The term biomass includes all raw and residual materials from agriculture and forestry. These may be used directly for gasification in a gas-generator (reactor) or after going through initial treatment (briquetting or pelletisation).

The following matrix gives you an idea about the potential biomasses and how they may be used in gasification:

Historically the most prominent form of biomass gasification is the gasification of wood which results into a generator-gas (producer gas) commonly referred to as woodgas. Especially in countries short on ressources, like Germany, the gasification of wood played a major role in thermal and electrical energy supply. Since the 1880s many cities or city infrastructure were supplied with electricity or warmth from woodgas like the water-pumps of the city of Basle or the main train station in Bonn.

In rural areas, were decentral energy supply had to make up for a lack of grid connectivity, the gasification of biomass remained essential to energy supply until the 1960s. Only the availability of cheap oil during this time lead to an end of this form of energy generation. While existing gasification systems are known to have been running until the 1990s there were no more meaningful installations of new systems.

The key characteristic of all biomasses is that they do not have a constant chemical composition. It varies due to the soil, the seasons or the weather and among all types of wood in general. As a result of these different structures, compositions as well as content of moisture woodgas does not have a fix definition for its composition. If a relatively homogenous feedstock is used in a woodgas generator then the variation in heatvalue of the woodgas will be just about ten percent.

The table below shows some example technical data for woodgas as it may result from gasification of wood in a Doppelfeuer gas-generator from A.H.T. Pyrogas:

Biomass as a locally available, renewable raw-material is of huge importance for the sustainable supply of electricity and warmth in the future. The following data has been taken from a study by A.H.T. Pyrogas on a potential switch of energy supply to biomass in the German community of Engelskirchen (east of Cologne). The daily growth of the forestry surrounding the community did equal the heat-value of around 12,000 liters of heating oil.

Based on an estimated requirement of 2,000 liters of heating oil per house, the yearly growth in wood would have been enough to supply 2,700 houses in Engelskirchen with heat from local biomass. This would have resulted in an overall saving of 4.5 million liters of heating oil and 14,900 metric tons less in CO2 emissions. At the same time the vast amount of costs for heating incurred by the households in the community would have remained within the regional economy. For every regional job set free, nine new ones would have been created and the community would have had an additional income from supplying electrical energy to the national grid.

Local biomass resources are a cost-efficient and nearby alternative to rising prices in oil and the price for natural gas which is subject to political uncertainties. Energy from biomass is available any time of day, any time of year and under any weather condition. Using gasification technology biomass can deliver a stable portion of the base-load demand for electrical energy as well as covering peak demand at short notice in a decentral infrastructure where production happens close to consumption.

You want to realise a biomass energy project? Instead of weak combustion technology you would like to use environmentally friendly, efficient and sustainable gasification technology?

Please download our initial questionnaire, fill it out completely and return it to us. We are looking forward to give you a first, non-binding estimation of prices. 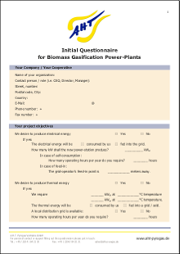