Gas, unlike solid or liquid fuels, can be easily burned inside an engine. This is why the first successfully developed internal combustion engines were gas-engines whose fuel came directly from a gas-generator. The most famous of them is probably the Otto-Engine developed by Deutz in Germany, which alongside the Diesel-Engine became the engine running the world today.

When burning a solid fuel the carbon and hydrogen contained within the matter are transformed into the green house gas CO2 and water (H2O) whereby heat is being created.

In contrast to this, gasification is a process by which solid or liquid materials are transformed into a gaseous state while maintaining all the energy chemically bound in the matter also in the gas. Only the physical state changes.

This gas is simple to control by mixing it with air while the gasification process itself allows for easy seperation of chemical and physical elements which are unwanted in the following stages.

Please have a look at the graphic below to see the sizes and application opportunities of our globally unique range of gasifieres. All our systems are based on a modular concept and can be expanded at a later time. 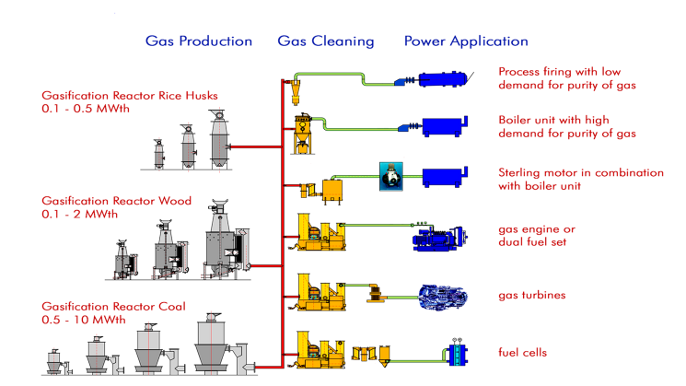